The United States spends more on its military than the next 27 countries combined. We boast that we have the greatest soldiers the world has ever seen. So what’s wrong with this picture: 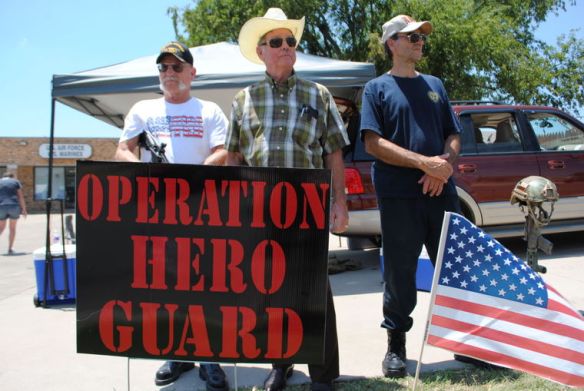 Just maybe this should make a few warning bells go off in your head. The greatest fighting men the world has ever seen are being guarded by a bunch of old white guys in Texas (where else) who have guns while the military has none. Apparently our “heroes” need babysitters in the form of gun activists.

You’re not going to see these guys guarding black churches or movie theaters or elementary schools, but they are out in force at recruiting stations even though the Pentagon has asked them to leave.

There are reasons why the US military does not allow members to carry arms off military bases, and that includes in support bases like the one where the Chattanooga shootings occurred. But these fine examples of American empty-headed patriotism are doing some armed guarding of their heroes at a strip mall in front of a recruiting office. There’s no better place to engage in a good old-fashioned American firefight than in front of a strip mall with all those moms and kids and small dogs running around, you know. Moms and kids and small dogs are very American, see? Some of those moms may even bake an apple pie someday. And they all really want to be caught in a by-god American crossfire between some towel-headed, jihadist dirt bag and true NRA heroes guarding their US military heroes with the American flag flying where it can drape across the ground every time the breeze drops a bit.

There are legal reasons why military personnel are not armed in civilian areas, some of them going back to 1878. But the military also cites reasons of “accidental discharges” and “everything else that goes along with having weapons that are loaded that causes injuries.” Let’s forget for the moment that this sounds an awful lot like reasons cited for limiting gun access in the civilian world as well, but the yahoos “protecting” our recruiters have no such limitations.

But why shouldn’t trained members of the military be allowed to carry loaded weapons? Surely they can handle such weapons safely! Well….. “Navy officials confirmed a separate incident outside Atlanta, where a recruiter accidently shot himself in the leg with his personal .45-caliber pistol while discussing the Tennessee shootings with one of his recruits. Officials said he showed the sailor the unloaded gun, then reloaded it and inadvertently discharged it as he was putting it back in his holster.”

To make matters worse for some apoplectic members of the conservative right, the US military actually enforces its gun regulations. It appears that the commander of the Chattanooga base used his own personal weapon to fire back at the shooter and will now be brought up on charges for carrying a loaded weapon on base. Military regulations are enforced because not enforcing them encourages others to ignore them – much the same as selective enforcement of civilian law.

So the US military actually has more gun control in place for its personnel on American soil than the entire civilian population. That should make those who would like to overthrow the government happy (and I’m not talking about outside terrorists groups), but maybe you should consider it a wake-up call.

While the gun nuts with automatic weapons have our military “safe” inside their strip mall store fronts, some Republican presidential candidates are starting to show their true colors. Mike Hucksterbee has stated recently that “he wouldn’t rule out deploying federal troops or using the Federal Bureau of Investigation to stop abortions from being performed.”

This is the sort of truly idiotic talk that should never leave the yap-hole of a presidential candidate. The legal reason for not arming military personnel on US soil goes back to the Posse Comitatus Act of 1878 which prohibits the federal government from using federal troops for domestic law enforcement. So the Huckster is advocating an illegal act on the part of his he-should-be-so-lucky administration in an effort to stir up his evangelical base, but in the process he is showing his ignorance of the law or contempt for it or both.

In addition to proposing an illegal use of federal troops, Huckleberry Hound has also proposed changing the US Constitution “so it’s in God’s standards.” Essentially, let’s forget all that hard work the “founding fathers” the right supposedly reveres so much did to create a government that was unique in the world and which would serve the most people for the longest time and just go with “God’s standards.” Because, you know, that works so well in Saudi Arabia.

And Mike Huckleknuckle is not alone.

A February poll found that 57% of those identifying as Republicans say that they would like to see Christianity as the national religion. Just forget the first amendment and make America a theocracy. Like, say, Iran.

No, no, no. Not like that. This would be different. This would be a Christian country. You know, like with a real God. And a president who would use federal troops to enforce God’s law, not man’s law. Like that kind of theocracy. Not like some Iranian Ayatollah sending the Revolutionary Guard to enforce the teachings of the Koran, not like that at all.

And if he couldn’t get the federal troops to do it he could just let the armed militias do it for him because they have the unarmed federal troops “safely guarded,” you know? I mean it’s not like we’ll get rid of the second amendment.

Rick Perry is probably an outlier in the 2016 presidential contest, but Huckaburp, and Ben Carson will both be on the debate stage with the other Fox News anointed 10.

The same poll discovered that 66% of Republican voters do not believe in climate change and nearly 50% don’t believe in evolution.

Big corporate money has changed the way American elections are conducted. The concept of a rational debate over the important issues has been hijacked by the ability of the billionaire class to focus the media wherever it sees fit. While Sanders and Clinton may want to talk about the way the finance system is rigged to preclude any growth in the middle class, along with specific causes and possible solutions, the media is focusing on the carnival sideshow of Dominionists and science deniers being organized by Roger Ailes and Fox News.

Donald Trump has set up his own tent where he can pander to bigots who have been deluded into thinking they too could become a billionaire and be a success, just like the Donald, when the truth is that those in the Republican organization make that more impossible every day. Apparently there are a lot of deluded bigots since Trump leads the Republican field at the moment. Even his statement that John McCain was only an American hero because he got shot down and spent time in the Hanoi Hilton didn’t put a dent in his popularity. Too many people agree with him.

The Koch brothers have thrown their financial weight behind Scott Walker, perhaps the most ruthless and dangerous presidential candidate ever. This guy makes Richard Nixon look good. Walker will say whatever he is told and whatever suits the moment. A Walker presidency is a Koch brother’s presidency. You can forget the Iran deal and you can definitely forget any effort to curb global warming. Walker’s stint as governor in Wisconsin showed his true colors quite plainly. The only life Scott Walker wants to better is his own.
Not that Donald Trump is any better, but Trump will leverage his threat of running as a third party candidate to get whatever he wants from the party and then bow out before or at the convention. Walker will be there until the end.

Donald Trump’s popularity on the right and Bernie Sanders supposedly surprising strength on the left are both indications that the American public actually does want change. What the public on both sides agree on is that what we have now is not working for the people no matter how well it may be working for the corporate and financial overlords and they are starting to see that. What the public can’t see yet is that there is a great deal of common ground between parties even though there are fundamental disagreements.

And they are also saying that Donald Trump can’t win.

The two candidates with the most populist backing can’t win.

So they are essentially saying that the people can’t win. Think about that.

Citizen militias with semi-automatic weapons can legally sit outside military installations where commanders will be prosecuted for carrying a gun while 57% of one of our two political parties believes we ought to toss out a basic tenet of American government so we can establish a theocracy, and you can’t do anything about it, because money speaks louder than people. And that particular party has the money.

The influence of billionaire power brokers must be removed from the political arena and you can’t expect that they will volunteer to remove their own influence. Neither will those they bought and paid for.

So that leaves us.

If you really, honestly believe that you have no control over what happens in your country, you need to go find an ice floe. We’ll throw you a quick going-away party and then send you on your way. Please put a white flag on your front door so we know not to bother with you until enough ice is found.

Now, for the rest of us: forget the pundits. We’ll have to do this on our own.

But that means it can’t be business as usual. I’m afraid effort will be involved. We will have to put the remote down and get off our collective asses. Because I can guarantee you that while our heroes may be safe in their store front recruiting offices, you will neither be comfortable nor safe in a Republican controlled future, and it really doesn’t matter which of the Bozos on the bus gets the nomination.

Your Humble Servant,
Roger A. Shipley, The Willowbrook Curmudgeon

2 thoughts on “Your Heroes Are Safe – How Are You Doing?”